It wasn’t even a sign, really. It was the side flap from a cardboard box, haphazardly torn and seated in his lap as he dozed in the summer sun on a busy sidewalk.

His eyes flew open when a stranger approached to hand him money – eyes a startling ice-blue. He held her gaze as she handed him a twenty, those eyes mesmerizing in the way they seemed the clearest and cleanest thing about him, a strange juxtaposition with the long greasy hair and the shapeless brown shirt and pants.

“But how did this happen?” she asked him gently. “What is your story?” Those blue eyes then moved past her, staring into the distance.

“I don’t know,” he said flatly. Homelessness is often seen as a city problem. But the plight of homeless veterans is one that can be found anywhere in our country, including the small towns and communities of the Big Bend.

Local woman given a chance to give local homeless a chance
Big Bend Homeless Coalition is a local organization that provides services to the homeless in eight counties in the area. Among the services they provide are emergency shelter and supportive housing, along with programs to prevent homelessness.

Kimberly Ladner, the Rapid Rehousing/Homeless Prevention Director for Big Bend Homeless Coalition, is an advocate for veterans suffering through homelessness. Her natural rapport and easy humor make talking to her seem like settling down for a comfortable chat with an old friend, but her enthusiasm for her work shines in conversation, which is liberally sprinkled with an impressive recall of dates, acronyms, and statistics. Ladner is in charge of four programs at the homeless coalition. and her path to this profession was unconventional.

Ladner lost her home in 2005 when Hurricane Katrina blew Waveland, Mississippi off the map. The total destruction left many on the Gulf Coast reeling. “I was so blessed with people helping me – I was overdrawn in the bank of karma,” she recalled with a smile.

“I knew I had to help.” Landing in Tallahassee, she applied for a position at Big Bend Homeless Coalition, addressing her lack of official social work credentials by pleading: “This is my passion. Give me a chance.”

Just as Ladner was offered “a chance” in her employment, she said she strives to afford victims of homelessness a chance, as well.

Vet’s journey from “the woods” to “a nice place”
Homelessness among veterans in Florida has been “cut in half” since 2011, according to the Florida Department of Veterans’ Affairs.

Chris Henry’s story is a prime example of how funding for homeless-combatting initiatives can transform lives for the better.

Formerly a Chief Petty Officer in the U.S. Navy, Henry lived “in the woods”- a wooded homeless camp in Gadsden County – for six years. A slim man with Beat slang dropped into his Georgia drawl, Henry struggled while living in the homeless camp.

Henry found a listening ear in Pat Smith, founder of Pat’s Pantry, a nonprofit that delivers food and supplies to the homeless in the Big Bend Area.

“I call her my mama,” Henry said of Smith, affectionately known to those she serves as “Miss Pat.”

“She took care of me,” Henry continued.

Smith smiled as she spoke about Henry.

“Chris being a vet, I offered to take him [to get help], and he finally accepted,” Smith recalled.

For the past four years, Henry has lived at Home Front, an apartment complex for veterans in need of housing.

“I got a nice place now,” Henry said.

While depression and other mental health issues can contribute to homelessness, Ladner cites Post Traumatic Stress Disorder and “self-medication” via drug and alcohol abuse as the primary causes of homelessness among veterans from the Vietnam War. She said based on her experience at Big Bend Homeless Coalition, veterans from more recent conflicts such as Desert Storm and the Iraq and Afghanistan wars fall into homelessness as a result of Post Traumatic Stress Disorder and Traumatic Brain Injury, sexual trauma and self-medication.

Regarding self-medication with alcohol and drugs, Ladner said, solemnly, “It makes them feel good when they didn’t feel anything at all.”

Veteran homelessness can lead to even greater problems than drug abuse, however.

In June, Veterans’ Affairs released its annual National Suicide Data Report, which contained an alarming statistic: an average of 16 veterans commit suicide every day in the United States.

Housing is the answer to more than just homelessness
While assistance with employment, health and other issues plaguing homeless veterans is great, Ladner said turning the tide will first require placing roofs over veterans’ heads.

They share similar struggles, but every homeless vet is a unique individual Smith said Henry’s story is echoed by homeless vets everywhere, yet, at the same time, is wholly unique.

“People put [the homeless] in one big box,” she said. “But there are all kinds of stories.”

“What is your story?” the stranger again asked the homeless vet in New Orleans. As he chronicled the experiences leading to his present state, his ice-blue eyes met hers. It was the same old story.

“I’m haunted,” he said softly at the conclusion of his story. She held his dirty hand for a moment; he squeezed her fingers.

“Thank you for seeing me,” he said quietly, as the strains of “Amazing Grace” floated out of a corner saxophone and down the tourist-busy sidewalk toward the vet with the tear-stained blue eyes. 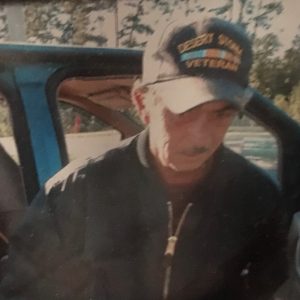