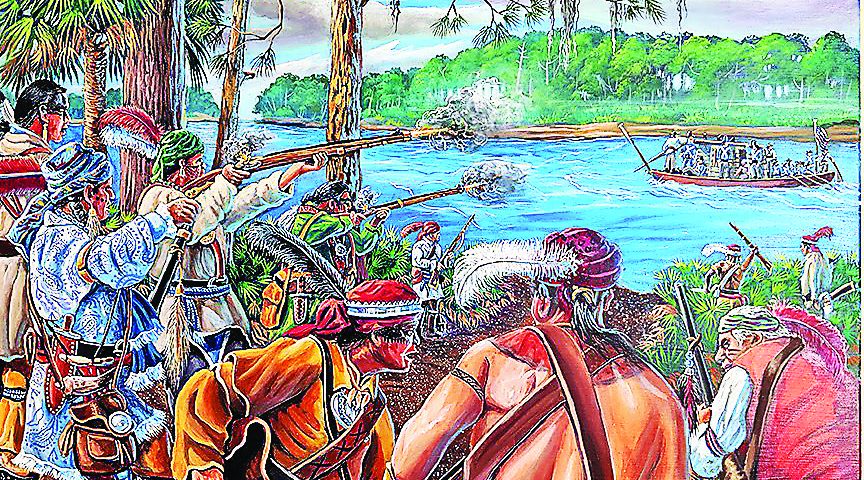 The big battle is back in Chattahoochee, and in more ways than one!

After being dislocated by Hurricane Michael in 2018, the annual Scott 1817 Seminole War Battle reenactment will return to Chattahoochee’s River Landing Park once again this December, offering the public a real-life, in-the-flesh glimpse at what historians characterize as “the bloodiest battle of the First Seminole War.” But even after the last musket shot of the three-day reenactment is fired on December 8, the historic battle will live on in Chattahoochee – depicted in vivid color and rich, hauntingly realistic texture on the exterior wall of an iconic downtown building.

Acclaimed husband-wife muralist duo Eric and Susan Sapronetti have been commissioned to paint a mural depicting the pivotal Seminole War battle known to many in our region as the “Scott Massacre of 1817”  on the side of the Padgett Jewelry building on Washington Street (U.S. 90) in downtown Chattahoochee. The Sapronettis are the paintbrush-wielding pair behind some of the most celebrated, instantly recognizable works of public art in North Florida, including multiple downtown Havana murals depicting various historical scenes, as well as a diverse assortment of privately commissioned murals in Tallahassee and beyond. The Sapronettis are expected to begin painting Chattahoochee’s new Scott 1817 Seminole War Battle mural in the coming weeks, as soon as they complete their current work-in-progress – a railroad-themed mural in downtown Havana.

The Chattahoochee mural will portray the opening moments of the Scott 1817 Seminole War Battle – an encounter that took place at what is today River Landing Park in downtown Chattahoochee. The mural project represents a collaborative effort between Chattahoochee Main Street and critically acclaimed regional history/travel/outdoors/misc website TwoEgg.tv – the brainchild of noted North Florida historian and media guru Dale Cox. In addition to dressing up the downtown streetscape,  the Sapronetti’s mammoth, vibrant piece of historical art will serve as an ideal visual complement to the new interpretive stations soon to be installed at River Landing Park, Cox said in a statement.

With the release of his 2013 book “The Scott Massacre of 1817,” Cox has been almost single-handedly  responsible for a recent resurgence of public interest in the Seminole Wars of the 19th century. Key, history-shaping moments in these early Florida frontier conflicts like the Scott Massacre were little-known even among local residents for many years. But thanks in large part to Cox’s tireless efforts to preserve and promote the region’s history, the bloody but historically important events of 1817 are no longer relegated to the dark, little visited recesses of college history textbooks. Between Chattahoochee’s historic battle reenactment, Cox’s book and the engaging, on-location video features on the subject at TwoEgg.tv, the Scott 1817 Seminole War Battle has enjoyed several years back in the sunshine – back in the public consciousness.

For those yet unfamiliar with the Scott Massacre, however, Cox offers the following overview:

“The Scott 1817 Seminole War Battle—sometimes called the Scott Massacre of 1817—took place on the Apalachicola River at what is now River Landing Park in Chattahoochee. Unprovoked attacks by soldiers on the Native American village of Fowltown in nearby Decatur County, Georgia, infuriated Seminole, Muscogee (Creek), Miccosukee, and Maroon (Black Seminole) warriors. They retaliated with a devastating strike.

The Native American and Maroon forces were lead by the Prophet Josiah Francis. He tried to block supplies from reaching Fort Scott, an important frontier outpost on today’s Lake Seminole. The goal was to starve out the garrison.

His first target was a large keelboat making its way up the Apalachicola. Onboard were some 40 soldiers, seven women, and four children led by 1st Lt. Richard W. Scott of the 7th Infantry Regiment.

The river then made a sharp 90-degree bend, the “elbow” which was where River Landing Park exists today. Hundreds of warriors lined the shoreline along this bend, concealing themselves behind trees and palmettos. The boat came into range and was forced close to the bank by the strong current, allowing the Native American and Maroon force to fire from almost point-blank range.

The first volley cut down the lieutenant and most of his able-bodied men. A bloody battle then followed as the boat drifted ashore and warriors waded into the Apalachicola to climb up and over its sides. The fighting ended with Lt. Scott, 34 soldiers, six women, and four children all dead. Six soldiers escaped by swimming away underwater until they could crawl ashore on the opposite or west bank of the river.

The only other survivor was Mrs. Elizabeth Stewart, the young wife of a soldier at Fort Scott. Knocked out by a blow to the head, she was taken prisoner and carried to the Seminole town of Tallahassee Talofa at today’s Tallahassee. Creek warriors fighting on the side of the United States and led by the Yuchi war chief Timpoochee Barnard freed her the following year at the Battle of the Econfina near modern Perry.

The loss of so many soldiers and civilians stunned U.S. officials, and the James Monroe Administration ordered Maj. Gen. Andrew Jackson to invade Spanish Florida and “punish” those responsible for the attack. At least two Creeks who took part in the battle were executed, while others undoubtedly died in other actions of the First Seminole War.”

To learn about other pivotal – but oft-little-known – chapters in North Florida history, visit acclaimed history/travel/outdoors/misc website TwoEgg.TV. For more on the Scott 1817 Seminole War Battle, check out https://exploresouthernhistory.com/scottmassacre.html