“If we can’t make it by that date, we definitely will re-open shortly after Christmas,” Rooks added.

The discovery of dangerous mold, as well as extensive water and roof damage in the wake of Hurricane Michael, threatened to make the closure permanent.  Similar air quality problems from black mold led to the permanent closure of Washington County’s historic courthouse in 2013.

“After the hurricane,” Rooks explained, “an air quality check showed that mold was the main problem. There was a little asbestos, but it was not airborne.”

But Rooks assured the community the mold found in Jackson County’s courthouse can be removed and most of its offices can re-open without risking the health of employees or visitors.

The tax collector’s office and the entire second floor will likely remain off limits for months, however, as Category 4 Michael wreaked havoc on the recently remodeled courthouse roof, causing water leaks and extensive damage in these areas.

First floor offices slated to re-open Monday are the clerk’s complex, the county judge and probation section and the property appraiser’s space.

In addition to repairs, the second floor will undergo already-planned remodeling before re-opening, hopefully in April, according to Rooks.

“Those renovations were scheduled previously,” Rooks said.  “They will be starting in January, so it was decided to not try to reopen this month.”

With the usual courtrooms out of commission, the Jackson County Corrections Facility on Penn Avenue will handle all inmate first appearances and arraignments for the time being. Trials may be delayed and rescheduled, or they could be held elsewhere until April, 14th Judicial Circuit official Amber Baggett said.

“Since we are out of the building now, we’ll let the demo and cleanup be completed, then start work on the four-month, $1.3 million renovation project,” Baggett said.

In the meantime, court trials will likely be held at the Jackson County Agriculture Center on Highway 90 West, next to the National Guard Armory, Baggett said.

“That is, unless security concerns make it necessary to hold the trial in more appropriate courtrooms in the circuit,” she explained.

Property tax bills can be paid at the driver’s license office Monday through Friday from 8 a.m. to 4:30 p.m.  The tax collector’s office in Sneads, 8087 Highway 90 East, is taking tax payments, but driver’s licenses can only be renewed in Marianna.

Except for the tax collector’s office and courtrooms, other courthouse offices currently housed in alternative locations will move back to the courthouse once it re-opens

The courthouse, built in the 1960s to replace a historic wood-framed structured, received a $1.8 million makeover and a new roof just six years ago.

All photos by Bo McMullian 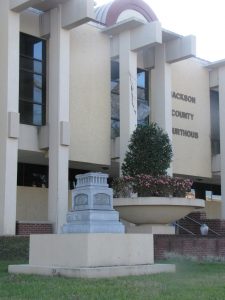 Photos:  0937: Hurricane Michael took down a Confederate monument on the north lawn of the Jackson County Courthouse, but spared the great oaks surrounding it. 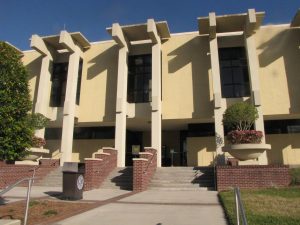 The west entrance to the Jackson County Courthouse leads to the tax collector’s office, which is closed until further notice.  Officials have no idea when it will be reopened. 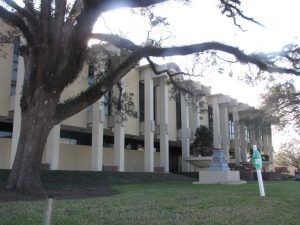 The second floor to the Jackson County courthouse was heavily damaged by water.  An ongoing renovation project will keep the courtrooms closed until April, Court Administrator Amber Baggett said Tuesday.