Linda Kranert is a historian, activist and devoted volunteer who works tirelessly to educate, entertain and enliven the public, supporters say. Kranert is the driving force behind Chattahoochee’s Apalachicola Arsenal Museum, as well as myriad other community events and functions.

Officially the “grants specialist,” Kranert is more commonly known to Arsenal visitors as museum coordinator. Her journey with the museum started in 1992 when her husband, Larry, was hired by Florida State Hospital as general counsel.

After moving onto the state hospital grounds, Kranert landed a job as medical unit supervisor. As part of her new-hire orientation, Kranert was taken on a tour of the expansive hospital grounds, which is dotted by numerous historic and unusual buildings.

During the tour, when Kranert first laid eyes on the building that, back then, was dubbed the “mattress factory,” Kranert said she immediately fell in love. The roof was caved in and trees were growing in the middle of the structure, but the gracefully towering columns still stood strong.

Upon learning the fascinating history behind the aging ruins – once part of a sprawling 19th century Army outpost, among additional roles over the years – she said she fell in love once more. So when plans to raze the old building surfaced, Kranert immediately sprung into action to thwart the demolition and save the building, which she recognized as an essential piece of Gadsden County history, regardless of its condition.

Kranert spent hours researching the building and chronicling its role in the history of Chattahoochee and the surrounding region. She pored over academic journals, archives and reference materials and interviewed local historians. After absorbing a vast wealth of knowledge, she argued for the building’s salvation in a bid for grant funding from the State Deparment to save and restore the tarnished local treasure.

Kranert pitched the idea to her boss, who turned it over to then-Florida State Hospital Administrator Bob Williams. Williams loved the idea, Kranert recalled, and right away formed a committee to pursue and manage the funds from the first restoration grant. The committee was diligent, writing and submitting multiple additional grants until it finally secured the funds to pay for the last of the building’s restoration work in 2013.

Though she had spent some time away, Kranert was just moving back to the Chattahoochee area when restoration work was completed and “the Arsenal” was born anew. In a bit of serendipity, she was invited to the grand opening and asked to help get the proposed Arsenal Museum off the ground.

And the rest – as they say – is history.

Kranert has officially served as a part-time employee of museum going on decades now; but she works more for passion than paycheck, devoting countless volunteer hours to the museum..  “ I truly hate to see historic areas fall apart and history forgotten,” Kranert said. “I do what I do for the community because I like to see it become alive again and to bring joy to those who live here.”

The Apalachicola Arsenal was the first and only military arsenal in the state of Florida. It bore witness to some of the first skirmishes in Florida of the American Civil War, when the governor ordered the Quincy Guard to seize the Arsenal and secure the ammunition.

Later, it was the first state penitentiary and the first mental health hospital in the state. The Arsenal is truly a trailblazer.

For more information, check out the museum’s Facebook page. 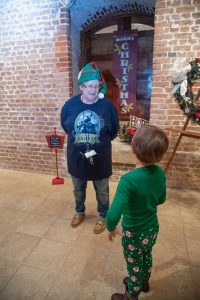 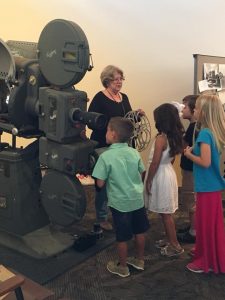 Linda Kranert leads a group of students on a tour of Chattahoochee’s Apalachicola Arsenal Museum,