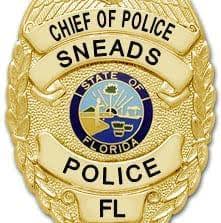 A thief made off with 17 galvanized steel fence posts from Sneads’ Adam Tucker Wilson ballpark earlier this week, police reported, and investigators are asking anyone with information in the alleged crime to come forward.

In a statement released this past Wednesday by the Sneads Police Department, Chief Mike Miller requests the public’s assistance with identifying and catching the unknown crook behind the alleged theft. Miller asks anyone with information in the case to call the Sneads Police Department at (850) 593-6403 or Crimestoppers at (850) 526-5000. Tipsters may remain anonymous, police said.

Investigators believe the alleged theft occurred during the night and/or early morning hours of this past Monday, July 22 and/or Tuesday, July 23, according to a news release. Each of the missing fence posts are eight feet in length, representing a substantial quantity of galvanized steel.

Metal implements like steel fence posts, copper wiring and myriad additional itemss are often stolen to be sold for scrap, in many cases to fund crippling methamphetamine addictions, according to the Florida Department of Law Enforcement. As scrap metal prices rise, so, too, do theft rates, state law enforcement data indicates.